I am happy to announce Celebration Edition #418:
“Romantic Canada”
By Victoria Hayward, 1876-1956.
With photographs by Edith S. Watson, 1861-1943.
Toronto: The Macmillan Company of Canada, Ltd., 1922.
http://digital.library.upenn.edu/women/hayward/canada/canada.html

I was inspired to republish “Romantic Canada” because of the wonderful photography of Edith S. Watson, an American photographer who spent nearly 35 years  photographing the  isolated areas of Canada that she travelled through.  During much of that time, she lived and travelled with  journalist Victoria "Queenie" Hayward, whom she met while  wintering in Bermuda.  With her camera, Watson documented the lives of people in Newfoundland and Labrador (not yet an official part of Canada), the Maritimes, Quebec, Ontario, Manitoba, Saskatchewan, Alberta, and British Columbia.  The two women visited and often stayed with First Nations people in Quebec and Ontario; Mennonites, Doukhobors, and other "New Canadians" in Manitoba.

One of the first things that struck me, in reading this book, was how our interpretation of the word "romance" has changed.  "Romance" is overwhelmingly used nowadays to indicate "ardent emotional attachment or involvement" (Wordnik.com).   In Victoria Hayward and Edith S. Watson's in "Romantic Canada" the meaning is much closer to  "a mysterious or fascinating quality or appeal, as of something adventurous, heroic, or strangely beautiful".  It is that mysterious appeal that beckons the traveller into wayside glens and little cottages snugly tucked away.  Romance does not lead one to as assignation, but rather to sit with an old artisan and hear stories of the “early days”.

“Romantic Canada” is an illustrated travelogue of Watson and Hayward’s journeys across Canada. Although dated, Hayward’s text is still a valuable record that captures details of how people lived  between the end of the 1800s and the start of the 1920s.  Watson’s black and white photographs continue to be strong and evocative.  In both their work, written and photographed, there is an awareness of the activities of a world of women -- women with carts and baskets and drying-racks for fish, with clam-rakes and looms and dyeing pots; knitting, spinning, and weaving. Some women have learned complicated skills while they were children, part of long-inherited family tradition.   Clearly women as well as men are involved in daily, heavy, ongoing, fatiguing labor: labor that is essential to the success of their communities.  By recognizing and including women, Hayward and Watson made visible aspects of daily life that were all too often ignored and forgotten in historical accounts and analysis. 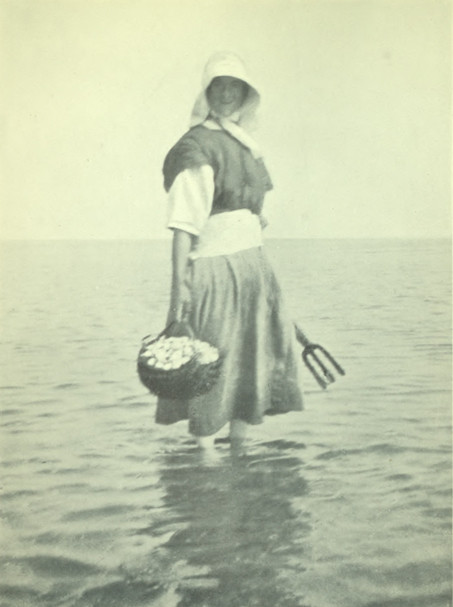 “The women of Saint Pierre wash their clothes in the streams, of which there are several running down the hills at the back of the town. They dam up the water with stones so as to form little pools, and kneel in wooden boxes on the edge of these to wash. They slap the linen with a flat piece of wood to make it very clean and white, and when all is done, they carry it in a wet bundle on their backs up the hill, to spread it to dry on the great rocks at the foot of the Crucifix.”

“In some of the French shore homes both the plaited and hooked rug give way to the Catalon. Having duly examined and admired those on the floor, Madame takes the visitor up into the garret to see the ponderous loom that holds another in the making. Scattered about are her wools, spun and dyed and perhaps previously sheared by herself. “

The extent to the which Hayward and Watson entrusted themselves to the kindness of strangers is striking.  The two women relied on passing villagers, carts, postmen, and sailors for a variety of transport, and on all sorts of chance-met folk for hospitality and lodging.  Hayward writes:

"The third, and ideal way to make the acquaintance of Cape Breton, is to hire an old horse and drive yourself, making leisurely trips in all directions, lingering wherever Fancy dictates, and putting up each night in any village, town or farmhouse which promises a comfortable night's lodging."

“The man or woman who takes to the open road and puts up where he can when dusk comes down over land and sea, is the voyager likely to have the best adventures and to make the most discoveries. He discovers, primarily, that many tongues are heard in these little sea-coast homes – English, Gaelic, Breton and Acadian-French, and should he go far north enough, some "Huskie". … Even so, the traveller coming to any of these sea-side doors in the evening light will never have to beg a place to lay his head. Hospitality is part of the unwritten code of these parts. An additional mouth to feed brings about absolutely no confusion. It matters not which language the housewife speaks. You may not be able to employ her Gaelic or she your English, but her heart is kind and friendly and the sea has taught her to be cosmopolitan. Her door is ajar to visitors; a small matter like languages will never close it.”

Only when they reach the Pacific coast does one suspect that the travellers are no longer quite so comfortable, the doors no longer quite so open.   Differences in culture are described as “romantic” and “charming” on the east coast.  On the west coast, they are “mysterious and bizarre”,  “full of those powerful undercurrents that thrive on the edge of the wilderness”.  Sadly, the houses of the Japanese fisher folk of Steveston are described from the outside, not the inside.   The author reports that it requires courage to step across the threshold of the Indians of Alert Bay, and one suspects that it is not only the odor of smoking fish that causes her to say so. The contrast between self and other is powerfully and painfully displayed when the author extols the drawing rooms of the Indian agent and the missionary’s wife, where she drank tea in a “real home” presenting a “high standard” for the “red men with totem pedigrees”.  One wishes that the writer could have travelled farther, beyond prejudice and condescension, and met Japanese and Alert Bay Indians with the same respect and consideration she accorded Doukhobor settlers, who were also common targets of prejudice at that time.  But, like us all, she is of her time and caught within her time.

In spite of these drawbacks, we can applaud the intrepid hearts of these two women, Victoria Hayward and Edith S. Watson, as they set out to explore by-ways and distant corners of Canada at the beginning of the 20th century.  We can appreciate their efforts to record the cultures they met through descriptions and photographs.  Their book still merits time and attention.  I hope you will enjoy it.
Tags: canada, women travellers
Subscribe
Comments for this post were disabled by the author